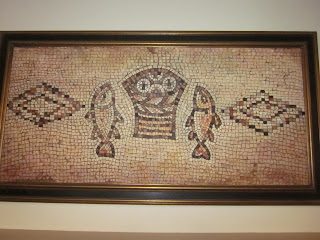 A discussion on CNN “Your Money” this weekend (Saturday and Sunday) confirmed that, if Congress fails to raise the debt ceiling Aug. 2, 2011, draconian cuts in existing benefits to seniors would go into effect immediately, including social security checks and Medicare benefits even that month (or Sept., since Social Security pays a month behind) in 2011.
The government would have to “balance the budget” right on the edge of the dime, the show said.
There might even be time to figure out a “means testing” formula. Government worker layoffs and furloughs would happen, the stock market would take a hit, and people would even be much less wealthy.
But some conservatives believe ordinary Americans need a “shock treatment” now to learn to live within their means.
And I had a conversation this morning suggesting that most conservative believe that the failure to raise the debt ceiling would cause long term harm. But some people would have to sacrifice. My own personal experience in talking to people is that many don’t believe the debt ceiling problem is “real” so GOP politicians get away with pretending it isn’t.
Again, Democrats say that the main issue is GOP refusal to raise any taxes on those already wealthy (so they don’t sacrifice, they take care of everyone else!)
The “means testing” would have to address two questions as to social security:
(1)    Given that the Social Security Trust fund actually belonged to Social Security (which it doesn’t – that’s the problem in point (2)), how much of a benefit amount is accounted for by his or her FICA tax contributions (and his or her employers’, which otherwise could have been paid as wages, so they are indirect contributions from the beneficiaries anyway). Take the self-employment tax into account, too, in answering the question. The percentage might approach 100% except for the longer life spans, and the ability of medicine (supported by Medicare) to prolong life spans so indefinitely in some cases.  So benefits could be cut immediately  (but relatively slightly) based on life span increases.
(2)    Given that the Treasury spent a lot of the Social Security trust fund through IOU’s and no longer has the money, how much should be taken out of seniors’ benefits to pay this back?  It sounds like stealing, or maybe more like how bankruptcy works, doesn’t it.  Or another way to look at this is to say that a good part of the FICA tax was not really an “annuity premium” but a general, however regressive, tax.  If so, how much of it?  Perhaps 1/3 of benefits have been lost this way.
Another obvious question is, why do we have a FICA-tax break this year when we have such a debt issue, and increasing questions of Entitlement Solvency (Social Security and Medicare)? True, it’s a stimulus or sorts. Can we afford it?  That tax break could obviously go away in August.
Some social conservatives (the “natural family” camp) want to exist parents with large families from some FICA taxes.
AARP has a YouTube video that opposes means testing here.  I’ll look for some other videos.
Posted by Bill Boushka at 12:30 PM No comments: 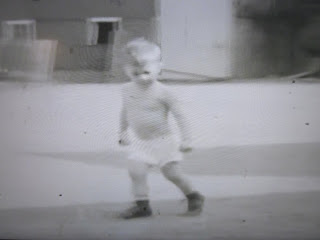 A reader on Ohio emailed to me a story where he exercised a stock option from a New York State employer after layoff or severance and possibly early retirement buyout from the employer, a common occurrence. Later, he filed for early Social Security benefits and was told that the monies from the stock option exercise would be treated as “wages” and caused him to have benefits reduced by the Annual Earnings Test.
I am quite surprised by this. I would have thought that income from stock options (essentially investment) from previous employment did not count as wages.
Comments anyone?

Picture: Family farm near Oberlin, OH, around 1946.
Posted by Bill Boushka at 7:28 AM No comments: 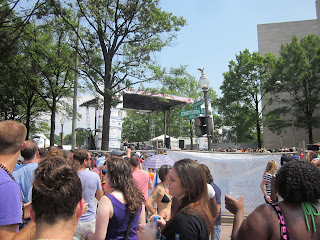 Look at the article “Social Security: Fears vs. Facts” on p 33 of the July-August 2010 issue of the AARP Magazine, “Your Money” column, piece by Liz Weston, link here.
Yes, she debunks the idea that “the Social Security trust fund assets are worthless” (point 2). But the government did spend some of these assets, backed up only by “IOU’s”, and threatens to default on Aug. 2 if the GOP really does forestall raising the debt ceiling limit. That could give creditors a legal basis to demand means testing, even now for some current retirees, to help settle the debt.  A court order to do so is at least conceivable. The other point is that Social Security should tell each beneficiary how much of his or her monthly benefit is actually accounted for by the FICA contributions, when compared to how private insurance companies compute annuity benefits.
Medicare is in fact in worse shape (and even more liable to means testing claims), because medicine keeps finding new ways to keep people alive longer but very expensively.  Previously paid Medicare taxes could not account for this.
On p. 64 of the same issue of the Magazine, President Obama is quoted as saying “Well, seniors have paid into Social Security. They’ve paid into Medicare over a lifetime of hard work. And the notion that somehow they are asking for something they don’t deserve makes no sense to me.”
Let’s hope John Boehner and President Obama made some progress on the golf course Saturday, light rain showers  (no storms) notwithstanding. 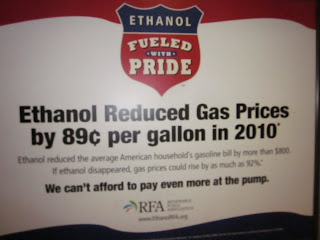 As communities and states tighten driver's license renewal on seniors, some are left with few transportation options 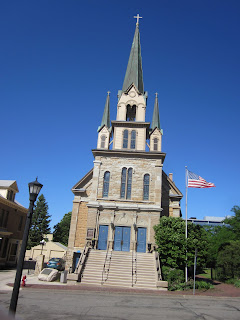 The Washington Times has an important story June 14 by Audrey Gertz about the mobility of aging seniors, here, “Aging drivers have few alternatives for a car”.
A report from Transportation for America called “Aging in Place: Fixing the Mobility Crisis” notes that communities and states may start requiring more supervision of aging drivers, including more performance tests (parallel parking?) and evaluations of family members (which raises real questions for the childless – like me). At age 75, seniors start to have accident rates comparable to those of teenagers.  The report has this link.
Seniors often live in areas with poor public transportation, and even those in major communities like CCRC’s require targeted assistance getting around.  The report ranked cities with poor access to public transportation. Atlanta was the worst.  New York City came out well. 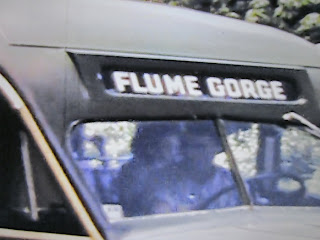 Insurance Broadcast has published an article on the Metlife Study of Caregiving Costs to Working Caregivers and reported over $3 trillion lost in wages, future pensions and even social security benefits, with the link for the report here.
Women are more likely to do hands-on caregiving than men, and women may be losing more future income financially.
Metlife’s own link is here.
The study reports enormous policy implications which so far are being overlooked in most of the major candidate debates. Long term care insurance and the building of CCRC's (Continuing Care Retirement Communities) are still skimming on the surface of the problems.
Many people are caught as the “sandwich generation”, but this also now includes people who did not have their own children, and will include many LGBT people.
Posted by Bill Boushka at 9:23 PM No comments:

Lieberman proposes to eliminate distinction between Medicare Parts A & B, require copays for all. 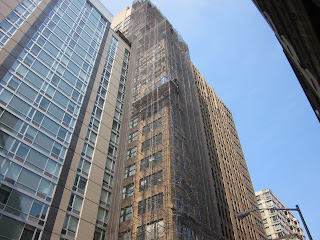 Independent Senator Joseph Lieberman of Connecticut has proposed a plan for Medicare which was published today in the Washington Post, “How Medicare Can Be Saved” (without privatization).  Lieberman wants to increase the age of eligibility by two months a year up to 67, and combine Parts A and B with a copay on every service, up to a limit (rather like a doughnut hole, maybe).  One wonders if more could be done to limit fee-for-service, and pay doctors flat fees for keeping seniors maintained up to a certain level of fee per age.  I guess that brings in “Hippocratic” problems.
Lieberman also notes that when seniors buy supplemental Part B insurance, they tend to use many more services, with the 80% bill going to taxpayers (in a sense).
Moderately conservative columnist Jennifer Rubin wrote with some most praise for the plan here on the Post site today, link (in her "Right Turn" column).
The interesting thing is that both Lieberman and Ryan think they are reforming Medicare without immediate, draconian shocks to current seniors and pleasing Wall Street.
I remember working on a failed "Combine A&B Medicare Project" in Dallas from 1979-1981, and Part B seemed to get most of the attention and politicizing among the funding plans.
Posted by Bill Boushka at 12:40 PM No comments:

PA appears to be enforcing its 2005 filial responsibility law A reader has alerted me to a case in Pennsylvania where someone was charged $10000 for her father’s end-of-life nursing home expenses, when the person had not applied for any Medicaid benefits. It sounds like Pennsylvania could be trying to enforce its 2005 revisions to its filial responsibility laws, moving the law from welfare to family code.
I’ll post more details as I get them. I advised the people involve to contact local television stations now.
Refer to my posting here July 12, 2007.
Posted by Bill Boushka at 2:04 PM No comments:

What happens if someone dies before retiring; what about old vestings in employers? 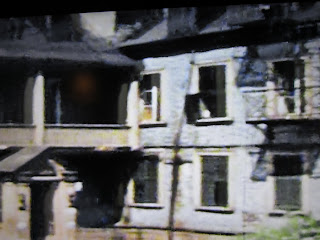 I got a question this morning. If someone passes away before retiring, could his beneficiaries receive the pension benefit when he would have reached retirement age?
I suspect that varies on the company and union contract involved. But in general, defined benefit pensions pay less to the retiree if they offer “years certain” to designated beneficiaries after the retiree’s death. And companies are getting much less generous with defined benefit pensions.
401(k) payouts, after leaving a company or retiring, also tend to have terms that vary a lot from one company to the next.  At ING, it could be paid out only in 5 or 10 year schedules, or else be rolled over into an IRA.
I’ve wondered about another situation. I put in six years with a company in Dallas in the 1980s, one that has been bought and spun off twice since I left.  I would have been vested.  I wonder if I do have any rights.
Posted by Bill Boushka at 8:44 AM No comments: