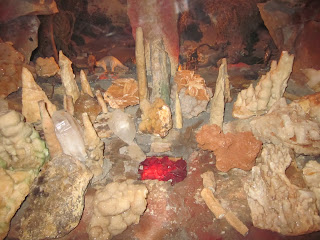 “They” talked about the debt ceiling some more today. Aug. 2 is the next “drop dead” date, particularly on CNN Sat PM, particularly Ali Velshi and Will Cain.
Seniors receiving social security now could possibly take hits if there were emergency cuts.  I think means testing could come much sooner if the GOP holds fast on no more taxes – that raises the basic question that the government simply doesn’t take in as much revenue and also brings up “moral” issues.
We spend about four times as much on seniors as on educating children. What’s unclear is how much of that “4x” was paid for by the seniors in their own working lives by FICA, maybe something like two-thirds.

Without a debt ceiling extension by Aug. 2, some social security and Medicare benefits could be cut immediately, as they aren't funded.

Yet polls show the majority of Americans don't support raising the debt ceiling!

In the meantime Treasury Secretary Geithner is playing with shoring up the federal employees' retirement program to extend Armageddon past May 16.

"Those Republicans" want to "get something" out of this threat.
Posted by Bill Boushka at 4:29 PM 1 comment:

Should Medicare Parts A and B be modeled after Part D 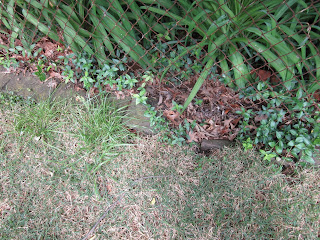 Michael O. Leavitt, secretary of HHS from 2005 to 2009 under Bush, has a column in The Washington Post today, Friday, May 20, p. A17, “The right model for Medicare”.  To wit, that’s to apply the Part D model, which he says works relatively well now with competition (despite the doughnut hole), to parts A and B.  That sounds rather like Wisconsin Republican Paul Ryan’s idea (link).
For me, prescription drugs aren't a problem because there is plenty of competition to make the one medication I take, Atenolol. For my mother, many drugs (Aricept and Namenda, and Plavix) were very expensive.
I could not find the current issue online yet (technical issue, maybe), but an older piece from August 2010, “The Medicare Reform Illusion” also focuses on the problems with the old fee for service model, (website url) here.
Would a reformed "Part A and B" have the doughnut hole?
Leavitt Partners has its own site here.
Posted by Bill Boushka at 9:00 AM No comments: 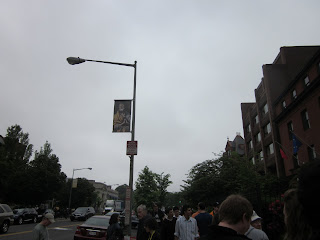 Christine Dugas has a very encouraging article Friday May 13 in USA Today, “401(k) savings are on the rise: Average balance reaches $74,900”, link here.
A typical family will need to accumulate wealth into the hundreds of thousands by age 65 for all wage-earners to anticipate comfortable retirement.  We all need to become millionaires (not “accidental billionaires”).
There is a debate in Congress and maybe the courts as to whether (both defined benefit and defined contribution) employer benefits and various kinds of financial planners or investment advisors (of the “My Little Margie” kind) have fiduciary duty, and Ron Lieber has a New York Times article Saturday as to the way this controversy interplays with the lack of indexed funds being offered with employer-based 401(k)’s.
He says professionals and unions alike should be pressuring employers to offer these funds now. The complete article is here (paywall subscription may be needed).
Posted by Bill Boushka at 6:41 AM No comments:

Social Security and Medicare go bust even sooner, according to reports issued Friday the 13th 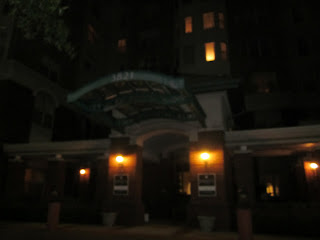 US Treasury Secretary announced yesterday that both Social Security and Medicare will go bust soonter than predicted.
The Social Security Trust Fund, even with creative accounting, would exhaust its assets by 2036 (previously the year had been 2037), forcing a 23% cut in benefits.
Medicare would become broke in 2034.
Heather Scott has the story May 13 on Forexlive here.
Robert Dominguez has a similar story in the New York Daily News (website url) here.
The Social Security Board of Trustees has a press release on the story (website url) here leading to a formal report (PDF) that was posted late May 13.  To quote the first point: “The projected point at which the combined Trust Funds will be exhausted comes in 2036 -- one year sooner than projected last year. At that time, there will be sufficient non-interest income coming in to pay about 77 percent of scheduled benefits.”
Posted by Bill Boushka at 7:57 AM No comments: 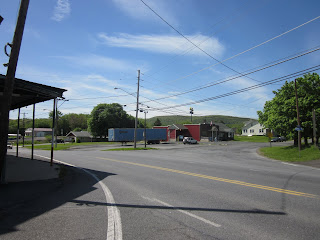 Here’s another analysis of Social Security accounting, at a site called “Fact Check”, from the Annenberg Public Policy Center, the kind of resource demanded of journalists, link here.
“Democrats Deny Social Security Red Ink: Some claim it doesn’t contribute to the federal deficit, but it does”.
True, benefits are not in immediate danger. But by 2037, according to John Boehner’s blog, trust funds could be exhausted and an automatic benefit cut of 22% would take in. (I’ll be 94 then; what about my own “generativity”?)   His blog posting on the topic is here. 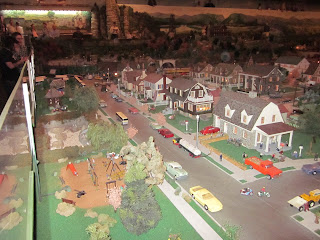 It’s also true that Medicare is indeed in more near-term peril. The basic problem is the “accounting trick” which makes social security less an “annuity” paid for by “premiums” that most of us think it is. Furthermore Congress cut the social security FICA tax in 2011 as part of economic stimulus.
The Washington Post, however, recently published an op-ed by Glenn Kessler, “Digging into Boeher’s anti-tax philosophy” here.
The Urban Institute’s Retire Security Program has a paper by Eugene Steuerle and Stephanie Rennane, “Social Security and the Budget”, link here. The paper discusses the demographic changes that have led to sustainability problems and maintains, however, that it is not a threat to today’s elderly, but a problem for the middle aged and young who must redesign their retirement policy completely.

Note: This posting should be dated Wednesday May 11; got moved when I reapplied a label.  The posting made earlier Saturday should be understood as following it. Okay, fixed now with Post Options.
Posted by Bill Boushka at 7:30 AM No comments: 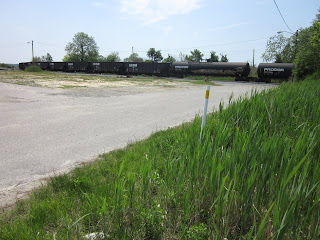 Les Leopold has an article on AlterNet “How Wall Street and the Toxic Philosophy of Ayn Rand Are Destroying Our Retirements”, link (wesbite url) here.   It’s rather hysterical.  The article comes out as the movie “Atlas Shrugged Part I” makes rounds, and Leopold says that Paul Ryan is a disciple of Ayn Rand.  But Ryan, the last I heard (it’s funny how the pronunciation of his name slips into “Rand”) was willing to leave Social Security alone for a while, and just go after Medicare.
But there is something pernicious about this: it’s all too easy to tell a senior like me, without progeny to demand respect from, that “my turn is up.”  Make way for the next generation. The answer: “have children."
By the way, it wasn't Darwin who preached "survival of the fittest" as social policy, it was Spencer. (And the Spartans.)
Posted by Bill Boushka at 9:25 AM No comments:

Inheritance: You can't take it with you; on the other side, you start over 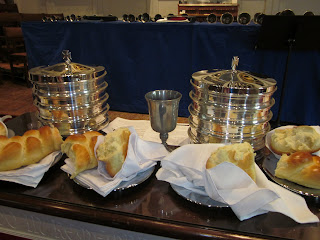 Sunday morning, May Day, Rev. Judith Fulp-Eickstaedt at Trinity Presbyterian Church in Arlington, VA, gave a sermon “Imperishable, Undefiled, Unfading”,  (I Peter 1:4) where she mentioned the controversy over inheritance taxes and the flurry over the expiration and renewal of the exemptions recently – with the message, you can’t take it with you anyway. Whatever happens, when you land on the other side, in a parallel universe, you start over. 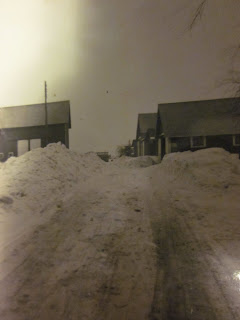 An aunt passed away in October, after several years in assisted living in Ohio, and I was surprised to find out how much she never spent.  She really didn’t know how to spend it. A victim of meningitis as a small girl with stunted growth (during the 1920s), she wound up supporting the rest of the family. Back in the thirties, she gave music lessons at an upright piano that would be in grandmother’s den for years.  In the 1980s, she actually worked in an hourly job in a laundry, and then took care of an older sister.  The accumulated wealth came from a house left by our grandmother, whom she took care of, and then an older sister, whom she took care of in the 90s. But, living modestly in apartments, she never knew what she had. 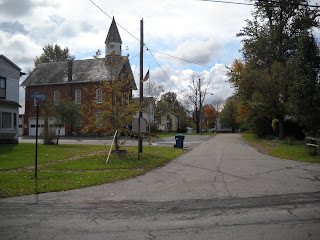 Financial stability certainly helps, in in the long run, one of the most important aspects of life in the senior years is being able to get done the work one thinks one should do. (For me, at least.)  There is a certain physicality to it that money has little or nothing to do with. 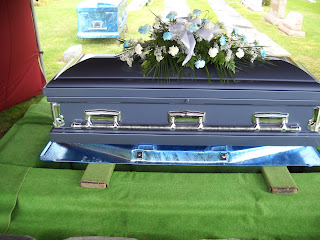 Something else: every publicly successful artist or composer had to be taught by someone at some point.

Below, a more distant relative in Ohio: 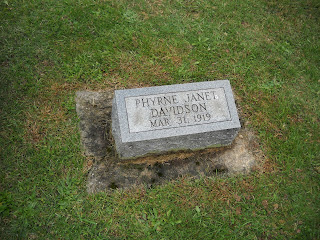 Below, apartment building where aunt lived for years, in 80s and 90s, until Oberlin College bought it for dorm space: 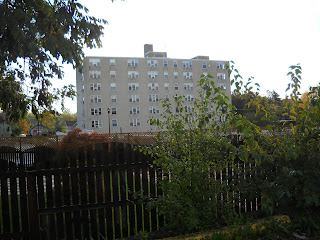 Posted by Bill Boushka at 7:27 AM No comments: