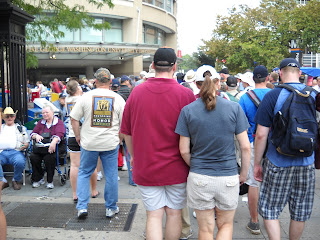 This refers to the opportunity to stop benefit, get a letter from Social Security telling how much to pay back, and then restarting benefits at a higher amount for life. The option is popular with people who start early benefits (as at age 62) for a lower amount, possibly because of layoff or job loss, and whose self-provided financial circumstances improve later (perhaps through a job or through inheritance), and who also believe that they may live longer than they had expected.

The Office of Management and Budget has the authority to make the decision, which could go into effect by early 2011, and would probably affect current early retirees. Congress does not need to have a say.

The measure could be seen as reducing Social Security’s exposure to eventual benefits deficit, as widely reported in the media, especially due to rapidly increasing longevity.

Private insurance companies may face similar calculations with life annuities.
Posted by Bill Boushka at 6:16 AM