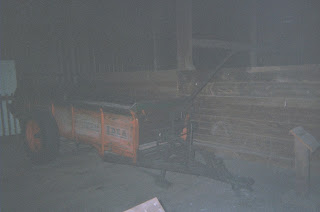 The AARP Magazine, for March/April 2010, has a major story by Mary A. Fischer, “Love is (not) all you need; to provide for loved ones who need long-term care, too many older Americans are resorting to extreme measures; it doesn’t have to be that way”, link here.

The article surveys the difficulties many families face with long-term care, discusses the federal Medicaid lookback rules (for passing on assets), and goes into some concepts in the process, such as “community spouse” and “spousal refusal.” With some couples, the legal situation encourages divorce so that the ill spouse is legally impoverished and qualifies for Medicaid. But in some cases the “community spouse” (the well one) can keep half the savings after spend down.

The article argues that Medicaid should focus more on assisting with in-home care or community care and less with nursing homes (for custodial care), institutions could eventually become saturated.

The article goes into the attempts in four states – Florida, Oregon, Wisconsin, and Connecticut, to provide funding to help people stay in their homes as long as possible.

The story gives the details for some families, and stresses that extreme disability occurs in some families at relatively early ages.

The article gives as a source the National Council on Aging, link.

The 2009 bill is HR 1721 introduced by Frank Pallone, D-NJ, with govtrack reference here.

The article did not go into filial responsibility laws, or “poor laws”, on the books in about 28 states. But some countries, including Germany and Japan, apparently provide much more support for eldercare than does the U.S.
Posted by Bill Boushka at 6:24 AM No comments:

State pension shortfall not as bad as it seems -- but has the crash of 2008 been considered yet? 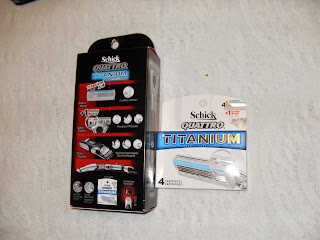 The Washington Post has an editorial today, Thursday, Feb. 18, “The Mixed News about State and Local Pensions”, link here. So, it won’t be so bad, or will it? States have about 84% of their $2.8 trillion long term obligations, but there is heavy concentration of shortfalls in a few states (New Jersey and Illinois), as well as a lack of taking into account the Crash of 2008.

The main link for the “Pew Center on the States” report seems to be (web url) here, title “The Trillion Dollar Gap: Underfunded State Retirement Systems and the Road to Reform.”
Posted by Bill Boushka at 11:42 AM No comments:

Medicare allows less than 25% of the list price for typical outpatient surgery (this is why the uninsured go bankrupt!) 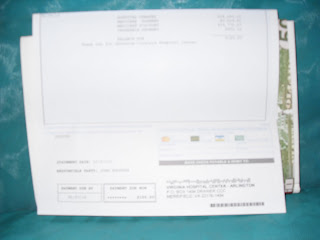 Well, my outpatient one hour bilateral inguinal hernia repair bill came today. The Virginia Hospital Center’s basic charge is a staggering $14143.10. But Medicare allows only 3368.03, or 23.8% of the list price. Part B supplemental paid $693.12, leaving me with the annual copay total of $155. An uninsured person would have been billed the complete $14000 amount. The Medicare-allowed amount is about ten times a typical car repair that takes that amount of time.

The Copay did go up in 2010, as one can tell from this source (link), the Ritter Insurance Marketing Blog, which gives the rundown on Medicare limits and Part B premiums, now somewhat keyed to income.

I got a CMS statement with an additional charge of $1365 list for the surgeon, for which Medicare allowed about $639 and paid 80%. But that means the total list was around $15500 for an outpatient hernia repair.

Office visits in Arlington for family practice seem to list at $200, and Medicare allows about $140.

See how the uninsured get shafted!
Posted by Bill Boushka at 8:12 PM No comments: 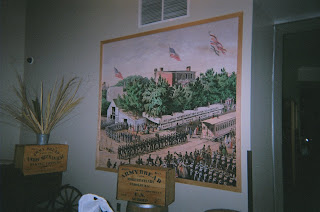 The February 15 issue of Time Magazine features a long section on longevity. On the web, the centerpiece of the issue seems to be “Health Checkup: How to Live 100 Years: A century of life was once a rare thing, but that is changing. Science is slowly unraveling the secrets of the centenarians. “

As a whole, the issue stresses the biology of longevity, with all the lifestyle factors regarding diet (consume much less food, perhaps), exercise, minerals (especially to prevent osteoporosis), anti-oxidants, and the fact that, once pregnancy became less risky with modern medicine, women would live longer than men. It seems that the biological forces that make men “bigger and stronger” can burn them up sooner, much as bigger stars burn up sooner than smaller stars like our Sun.

In the past, PBS and ABC (with both Barbara Walters and then Oprah Winfrey and Dr. Oz) have run programs on longevity. Besides the biological factors, there are also some social ones. People with strong extended family and community ties tend to live longer – this is the experience of the “blue zones”, although there are exceptions in individual cases. Barbara Walters once introduced a 94 year old woman in New York City still working as a financial planner.

The issue also stresses that longevity is not necessarily a good thing (“be careful what you wish for”) unless the extra years are of high quality living, without frailty and cognitive decline.

Alice Park wrote the main part of the issue (“How to live to 100 years”), (web link here) and discusses a Long Life Family Study at the National Institute of Aging at NIH, with main website here.

One problem is that medicine is prolonging longevity with longer periods of disability (including Azlheimer’s) at end of life, creating new challenges for adult children (who are often fewer in number because of smaller families), both emotionally and financially. In states with filial responsibility laws, adult children can be required to support them as long as they live. Public policy has not faced this question cleanly. The extended family unit does not have the psychological meaning for many people that it did a couple of generations ago, and yet the need for it grows if longevity, especially with longer disability, increases.
Posted by Bill Boushka at 6:55 AM No comments: 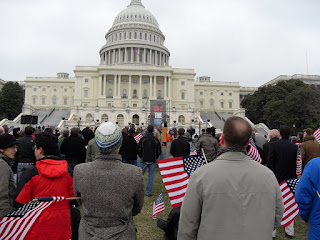 Obama has specific plans to expand tax credits and indirect matches to retirement savers, and to require all employers to offer what amount to automatic IRA’s. This could be an issue for employers who hire people mainly as independent contractors, temporary workers, or others in the low-wage area. But to some extent Obama’s plans to meet the spirit of GOP plans to encourage individual workers to own their retirement accounts, even to the point of gradually and eventually supplementing or even replacing social security.

Generally, Obama has not been as vocal about retirement and senior issues as he has about health care reform in general.

Large numbers of Americans who could take advantage of matching plans and tax credits today do not.

An important bill before the 111th Congress is the 401(k) Fair Disclosure and Pension Security Act of 2009, govtrack reference here, sponsored by Rep. George Miller (D-CA).
Posted by Bill Boushka at 6:25 PM No comments: 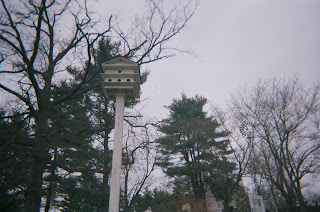 AARP has a particularly interesting story “Grandparents Crucial for Grandchildren With Autism: A new survey of grandparents who have grandchildren with Autism Spectrum Disorders plays a vital role in research,” by Amy Goyer, with the link here.

The Interactive Autism Network (link) did a study (of 2600 families) of grandparental involvement, relating the fact that grandparents are often the first to notice symptoms. Many lived near their grandchildren.

The story relates how grandparents are making sacrifices of their own retirement savings and borrowing money to help grandchildren with autism. That could greatly complicate things if the grandparents needs long term care themselves later.

The article discusses the range of presentations of “autism spectrum disorders” (or “pervasive development disorders”), including much milder forms like Aspergers.
Posted by Bill Boushka at 12:32 PM No comments:

Long Term Care insurance can be purchased with a "single premium" deposit, as part of a universal life policy 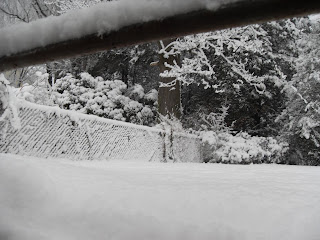 There is a new twist on long term care insurance in the market. That is the “single premium” long term care policy. Lincoln Financial Group calls it the “Money Guard Reserve” (a trademarked product). At a particular age, the purchaser deposits a sum, usually $100000. He or she gets a total long term care benefit of about four times that, and a monthly maximum benefit (for up to six years) of about 6% of that. Presumably there are conditions upon which the benefits can he claimed (two ADL’s – activities of daily living -- compromised). There is a cash value which rises to slightly over the premium at life expectancy and then declines, and a similar value which is usually the same as the deposit, or slightly more around the years of life expectancy. There is also a death benefit for named beneficiaries.

Applicants are screened medically for pre-existing conditions before being accepted.

Social Security will run a cash deficit this year: the "interest" is said to be phantom 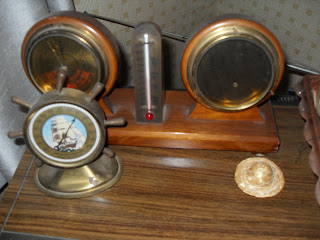 Allan Sloan has a sensational column on the perils of Social Security today (Feb. 2) on p A13 of The Washington Post, in his “Deals” column. You have to thumb a few pages before the Editorials to see it. The link is here. The print title is “Next in line for a bailout: Social Security” and the online version is titled “Social Security could be next to need a bailout.”

Sloan’s point is that even in 2010 Social Security’s cash flow will be negative, because Social Security accounting incorporates phony “interest” which comprises IOU’s based on phantom zone (“Smallville”, yes) holdings of Treasury securities. You can play games with the accounting equation, or with chemistry 101 equations, it seems.

Medicare: patients see far to many specialists, who don't share information at all 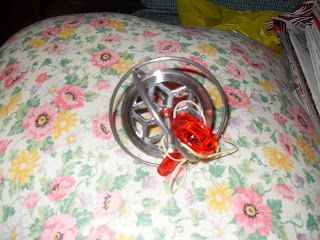 Robert Samuelson offered some interesting tidbits on Medicare in his column “Health Reform: what to do before spending more” today, Feb. 1, on p A17 of The Washington Post, link here.

He points out that the typical Medicare recipient sees “six or seven doctors a year”. Specialists are very jealous of their turf, and don’t share information very well. Patients are expected to bring lists of medications and other doctors, which may be inaccurate. Tests are segmented. To get a stress test (maybe with some embarrassing shaving) or an echocardiogram, you get sent to a cardiologist (with some specific instructions). But the same cardiologist will not draw blood.

He also points out that networks with electronic recordskeeping would need to enroll at least 100000 patients to become cost-effective.
Posted by Bill Boushka at 10:58 AM No comments: