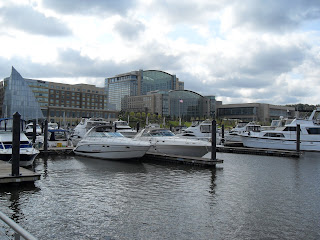 Theresa Guiladducci has an important op-ed on p A35 of The New York Times today (Saturday, Sept. 27), “Save Pensions”, link here. She writes that the new bailout plan, still in contentious negotiation, should allow retirees to clean out “junk” from their 401K accounts.

She also suggests a new kind of government-protected individual retirement annuity, which would supplement (not replace) social security, funded by individual contributions into a “sovereign wealth fund” of more carefully structured investments, although they could include some risky issues. She says the government should guarantee a minimum deposit of $600 for those who earn little.

CNN discussions are asking if the bailout could affect social security. I don’t see how, since the Trust Fund is supposed to be separate, but it isn’t, quite. However, it’s conceivable that a deal could affect when the trust fund goes into deficit, and make the subsequent issue of reforming social security even more urgent.
Posted by Bill Boushka at 11:16 AM